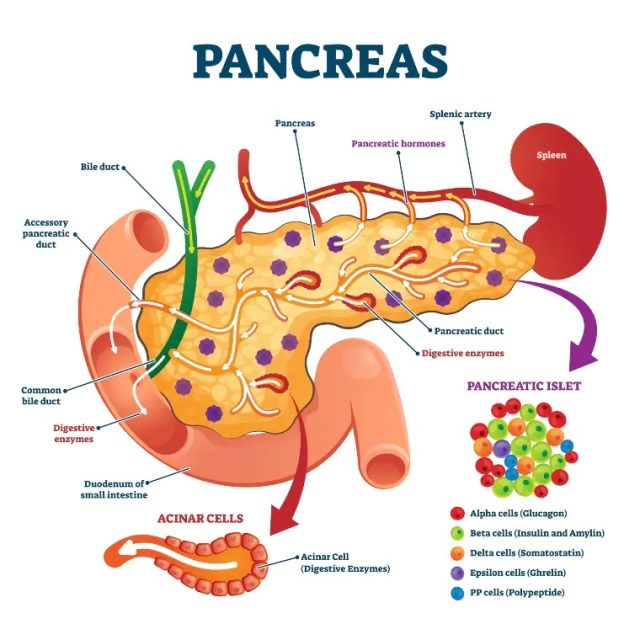 Pancreatic cancer begins in the tissues of your pancreas — an organ in your abdomen that lies behind the lower part of your stomach. Your pancreas releases enzymes that aid digestion and produces hormones that help manage your blood sugar.

Pancreatic cancer is seldom detected at its early stages when it’s most curable. This is because it often doesn’t cause symptoms until after it has spread to other organs.

Pancreatic cancer treatment options are chosen based on the extent of the cancer. Options may include surgery, chemotherapy, radiation therapy or a combination of these.

Signs and symptoms of pancreatic cancer often don’t occur until the disease is advanced.

Factors that may increase your risk of pancreatic cancer include:

A large study demonstrated that the combination of smoking, long-standing diabetes and a poor diet increases the risk of pancreatic cancer beyond the risk of any one of these factors alone.

To determine which type of surgery might be best, it’s important to know the stage (extent) of the cancer. But it can be hard to stage pancreatic cancer accurately just using imaging tests. Sometimes laparoscopy is done first to help determine the extent of the cancer and if it can be resected.

For this procedure, the surgeon makes a few small incisions (cuts) in the abdomen (belly) and inserts long, thin instruments. One of these has a small video camera on the end so the surgeon can see inside the abdomen and look at the pancreas and other organs. Biopsy samples of tumors and other abnormal areas can show how far the cancer has spread.

Studies have shown that removing only part of a pancreatic cancer doesn’t help patients live longer, so potentially curative surgery is only done if the surgeon thinks all of the cancer can be removed.

This is a very complex surgery and it can be very hard for patients. It can cause complications and might take weeks or months to recover from fully. If you’re thinking about having this type of surgery, it’s important to weigh the potential benefits and risks carefully.

Fewer than 1 in 5 pancreatic cancers appear to be confined to the pancreas at the time they are found. Even then, not all of these cancers turn out to be truly resectable (able to be completely removed). Sometimes after the surgeon starts the operation it becomes clear that the cancer has grown too far to be completely taken out. If this happens, the operation may be stopped, or the surgeon might continue with a smaller operation with a goal of relieving or preventing symptoms (see “Palliative surgery” below). This is because the planned operation would be very unlikely to cure the cancer and could still lead to major side effects. It would also lengthen the recovery time, which could delay other treatments.

Surgery offers the only realistic chance to cure pancreatic cancer, but it doesn’t always lead to a cure. Even if all visible cancer is removed, often some cancer cells have already spread to other parts of the body. These cells can grow into new tumors over time, which can be hard to treat.

Curative surgery is done mainly to treat cancers in the head of the pancreas. Because these cancers are near the bile duct, they often cause jaundice, which sometimes allows them to be found early enough to be removed completely. Surgeries for other parts of the pancreas are described below, and are done if it’s possible to remove all of the cancer.

This is the most common operation to remove a cancer in the head of the pancreas.

Most often, this operation is done through a large incision (cut) down the middle of the belly. Some doctors at major cancer centers also do the operation laparoscopically, which is sometimes known as keyhole surgery (see What’s New in Pancreatic Cancer Research?).

A Whipple procedure is a very complex operation that requires a surgeon with a lot of skill and experience. It carries a relatively high risk of complications that can be life threatening. When the operation is done in small hospitals or by doctors with less experience, as many as 15% of patients may die as a result of surgical complications. In contrast, when the operation is done in cancer centers by surgeons experienced in the procedure, fewer than 5% of patients die as a direct result of surgery.

To have the best outcome, it’s important to be treated by a surgeon who does many of these operations and to have the surgery at a hospital where many of them are done. In general, people having this type of surgery do better when it’s done at a hospital that does at least 15 to 20 Whipple procedures per year.

Still, even under the best circumstances, many patients have complications from the surgery.

In this operation, the surgeon removes only the tail of the pancreas or the tail and a portion of the body of the pancreas. The spleen is usually removed as well. The spleen helps the body fight infections, so if it’s removed you’ll be at increased risk of infection with certain bacteria. To help with this, doctors recommend that patients get certain vaccines before this surgery.

This surgery is used to treat cancers found in the tail and body of the pancreas. Unfortunately, many of these tumors have usually already spread by the time they are found and surgery is not always an option.

This operation removes the entire pancreas, as well as the gallbladder, part of the stomach and small intestine, and the spleen. This surgery might be an option if the cancer has spread throughout the pancreas but can still be removed. But this type of surgery is used less often than the other operations because there doesn’t seem to be a major advantage in removing the whole pancreas, and it can have major side effects.

It’s possible to live without a pancreas. But when the entire pancreas is removed, people are left without the cells that make insulin and other hormones that help maintain safe blood sugar levels. These people develop diabetes, which can be hard to manage because they are totally dependent on insulin shots. People who have had this surgery also need to take pancreatic enzyme pills to help them digest certain foods.

Before you have this operation, your doctor will recommend that you get certain vaccines because the spleen will be removed.

If the cancer has spread too far to be removed completely, any surgery being considered would be palliative (intended to relieve symptoms). Because pancreatic cancer can spread quickly, most doctors don’t advise major surgery for palliation, especially for people who are in poor health.

Sometimes surgery might be started with the hope it will cure the patient, but once it begins the surgeon discovers this is not possible. In this case, the surgeon might do a less extensive, palliative operation known as bypass surgery to help relieve symptoms.

Cancers growing in the head of the pancreas can block the common bile duct as it passes through this part of the pancreas. This can cause pain and digestive problems because bile can’t get into the intestine. The bile chemicals will also build up in the body, which can cause jaundice, nausea, vomiting, and other problems. There are two main options to relieve bile duct blockage in this situation:

The most common approach to relieving a blocked bile duct does not involve actual surgery. Instead, a stent (small tube, usually made of metal) is put inside the duct to keep it open. This is usually done through an endoscope (a long, flexible tube) while you are sedated. Often this is part of an endoscopic retrograde cholangiopancreatography (ERCP). The doctor passes the endoscope down the throat and all the way into the small intestine. Through the endoscope, the doctor can then put the stent into the bile duct. The stent can also be put in place through the skin during a percutaneous transhepatic cholangiography (PTC). (See Tests for Pancreatic Cancer.)

The stent helps keep the bile duct open even if the surrounding cancer presses on it. But after several months, the stent may become clogged and may need to be cleared or replaced. Larger stents can also be used to keep parts of the small intestine open if they are in danger of being blocked by the cancer.

A bile duct stent can also be put in to help relieve jaundice before curative surgery is done (which would typically be a couple of weeks later). This can help lower the risk of complications from surgery.

In people who are healthy enough, another option for relieving a blocked bile duct is surgery to reroute the flow of bile from the common bile duct directly into the small intestine, bypassing the pancreas. This typically requires a large incision (cut) in the abdomen, and it can take weeks to recover from this. Sometimes surgery can be done through several small cuts in the abdomen using special long surgical tools. (This is known as laparoscopic or keyhole surgery.)

Having a stent placed is often easier and the recovery is much shorter, which is why this is done more often than bypass surgery. But surgery can have some advantages, such as:

It can often give longer-lasting relief than a stent, which might need to be cleaned out or replaced.

It might be an option if a stent can’t be placed for some reason.

During surgery, the surgeon may be able to cut some of the nerves around the pancreas or inject them with alcohol. Because pancreatic cancer often causes pain if it reaches these nerves, this procedure may reduce or get rid of any pain caused by the cancer.

Sometimes, the end of the stomach is disconnected from the duodenum (the first part of the small intestine) and attached farther down the small intestine during this surgery as well. This is known as a gastric bypass. This is done because over time the cancer might grow large enough to block the duodenum, which can cause pain and vomiting and often requires urgent surgery. Bypassing the duodenum before this happens can sometimes help avoid this.

Bypass surgery can still be a major operation, so it’s important that you are healthy enough to tolerate it and that you talk with your doctor about the possible benefits and risks before you have the surgery.